Andrographis is commonly known as kalmegh (“king of bitters”) in India.

Andrographis is a bitter digestive tonic useful during convalescence, and with evidence for preventing infections.

The intense bitterness of this herb is its overwhelming sensory property. The initial aroma of the herb or its tea or extract is rather animal-like. However on tasting there are waves of varying bitter flavours, and a bitter aftertaste that can linger for hours if no other food or drink is taken. Almost hidden after initial taste impact however is a slight but distinct heat.

All around the world the actions of traditional medicines were understood by their immediate sensory impacts. Click on each of the key qualities of andrographis below to learn more:

For reducing symptoms in viral respiratory infections including the common cold, flu and sore throat.

As a bitter digestive there is likely to be additional benefit in the treatment of infections in the gut, including even parasitic infestation. It may help with gallbladder and bilious conditions.

It can also be considered for prevention and treatment of urinary tract infections.

Into the heart of andrographis

Andrographis has a strong reputation as a bitter digestive tonic, used especially during convalescence, after infectious illness or parasitic infestation.

It has been shown to stimulate the immune system, especially white blood cell activity, to stimulate bile production and flow and to protects the liver from toxins. It can also counter the damaging effects of free radicals.

The bitter taste of the herb indicates that choleretic (bile stimulating) claims are likely, and there are traditional applications for liver problems. Since andrographis is energetically “cold” (meaning it reduces circulatory and heat-generating activity and enhances digestion and detoxification), it may be taken in combination with “warm” herbs (such as ginger and astragalus), especially in a cold, debilitated constitution.

In Ayurveda, the ancient healing system of India, andrographis was used as a bitter tonic, a remedy against intestinal parasites, and a general stomach tonic. It was said to increase appetite, strengthen digestion, and diminish flatulence, hyperacidity, and biliousness. It was also used in the management of many more complex conditions, including diabetes, hepatitis, and general debility.  It was specifically used for feverish stomach complaints in young children and to help weak, convalescing individuals regain appetite and strength after illness.

Known as chuan xin lian in traditional Chinese medicine (TCM), andrographis was traditionally characterised as a bitter (or, in the terminology of TCM, ‘cooling, drying’) remedy. It is used in modern Chinese medicine to eliminate toxins (‘heat’), especially in disorders of the lungs, throat, urinary system, and skin. ‘Heat’ patterns in Chinese medicine involve active inflammation, infection, swelling, and, often, burning pain. Examples in which andrographis showed most benefit include raw sore throats, influenza, bronchitis, lung infections and fever. Andrographis is believed to have particular benefit with ‘damp heat’ patterns affecting excretory functions, particularly those relating to the liver, bile and kidneys, and is used when these were associated with diarrhoea, dysentery, and urinary problems. Externally, andrographis was used in TCM to treat oozing wounds, sores, carbuncles, scalds, boils, burns, eczema, and snakebites.

Immunity: Andrographis is indicated where there is lowered immunity and acute and chronic infections. It is an immune stimulant rather than solely being anti-bacterial and can be used to reduce symptoms in influenza, upper respiratory tract infections such as common cold, coughs, sinusitis, sore throats, otitis media, and also for urinary infections and vaginitis.

Liver:  Andrographis increases bile flow and offers protection to hepatocytes (liver cells), and with its bitter and cooling qualities, is well suited to liver infections and inflammation. As andrographis has very effective hepatoprotective as well as anti-viral activity, it should be considered in hepatitis and all forms of sluggish liver where there is a reduced ability to digest fats or alcohol.

Digestion: Andrographis was used historically in bacillary dysentery and enteritis. And including gut infections with parasites, protozoa and fungi. When andrographis is combined with warming aromatic herbs such as Cardamom (Elettaria cardamomum) and Cinnamon (Cinnamonum zeylanicum) it can stimulate the appetite and reduce mucus.

Skin: Hot, inflammatory skin conditions such as sores and eczema can be effectively treated with Andrographis. It can also be used externally as a wash or in a cream where there are signs of infection.

At one point, andrographis was advertised as a substitute for quinine in the treatment of malaria (possibly due to its bitterness).

No significant adverse effects have been found with taking andrographis, although high doses may rarely cause stomach upsets, urticaria (hives), or headaches.  It is quite a strong bitter remedy and although no problems are expected, it is wise to check with a qualified health professional before using it during pregnancy.

The daily maintenance dose for an adult is about 2 to 3 g dried herb equivalent; during infection, the effective dose is nearer to 6 g per day. Because it is very bitter, andrographis may be difficult to take in liquid preparations. 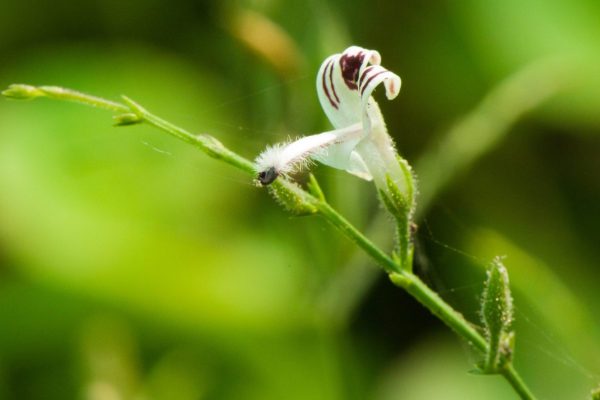